Not all Jersey Girls are about hair, nails, and "WTF"

The Story of Gilmore, or why I believe in love at first sight 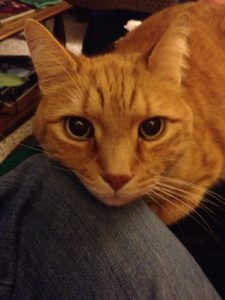 “I’m not supposed to have a cat,” I told my coworker. He’d just finished telling a story about how he and some friends found a box of kittens somewhere in New York the previous day. Each young man had taken one kitten. He said he couldn’t keep the kitten he took because he had too many roommates. The kitten was small, he said. He was worried about it getting “lost in the shuffle” at the house.
“I signed a lease saying I don’t have any pets, nor will I adopt any while I live there,” I said. Somehow, my coworker zeroed in on me as a cat person, and he was not wrong. We had cats growing up, and I longed for a pet. I was 27, just out of an ugly relationship, and I was feeling lost. I lived alone, and a kitten would be perfect company. There was the matter of my lease, though…I didn’t want to lose my apartment.
I finally agreed to go out to his car on my break “just to look.” I think I knew in my heart that this kitten was going home with me. As we approached the car, a tiny orange striped head popped up, and the tiny pink mouth opened in a soundless mew. That’s all it took. I was feet from the car, hadn’t even heard his voice or touched his fur; yet I fell head over heels in love with this tiny being.
I took him home that day. I stopped for food and dishes, litter and a box, and of course several toys for my new friend. I turned him loose in the apartment and watched him explore. He was so small that he fit into my two hands. His squeaky mews amused me while I was awake, and annoyingly woke me while I slept. He was so small he could only hop up and down the stairs, and he had to climb to get into bed with me. I worried about everything. The toilet had to be closed in case he fell in and drowned. After a frightening episode of him worming his way under the stove, I blocked it off so he couldn’t get under there. He climbed the screen on my patio door. He tried to escape outside numerous times. He hid under furniture and attacked my feet, earning himself the name The Mighty Toe Hunter. The name he was blessed with was Gilmore. When he was awake, he got into EVERYTHING. When he slept, he slept hard and even snored. He would play with a fishing pole toy, jumping higher and higher to catch it until he threw himself on the ground, panting with exertion. He flipped his food and water bowls over, and ran to me crying because he was hungry or thirsty. He greeted me when I came home, tail upraised, and full of meows about his day. I knew I was loved in return, if the force of his head butts were any indication. When he slept, he was the most precious angel I ever saw.
When he was awake, he could be a holy terror. Knocking things to the floor, chewing things he wasn’t supposed to, and trying to get into my dinner were some of his favorite pastimes. For a tiny kitten, he had a huge personality, and sometimes, it seemed he was in two or more places at once.
He was clever, so I was able to train him to beg for treats and walk on a harness. That clever mind also figured out how to get outside, and learned to associate outside with the harness, so I had to stop walking him after a few years. He loved riding in the car as a young cat. I could take him on short trips to Wawa, and leave him in the front passenger seat. He would prop his front paws up on the dash and watch the world go by. And I am completely not biased in saying he was adorable riding in my car.
He was friendly, and curious about anyone who came to visit; even going through friends’ bags or purses when they came over. If he really liked you, he would get on the back of the chair behind you and nuzzle your hair. I would warn anyone who came over; not everyone enjoys a cat in his or her bag or hair.
He’s had my heart since day one. Anytime I was ill or upset, he seemed to know. He used his purrs and snuggles to heal whatever ailed me. Those ears have heard many secrets, and his fur has dried more than a few tears, too. Anytime I couldn’t sleep, he magically appeared from his nighttime hiding place to keep me company. He would answer every time I called him or chirped a certain note. Sometimes he would trot to me, tail upraised, eager for affection. Sometimes the side of his face would be flattened with sleep and he would look put out at being awakened. He was terrible at hide and seek, and an expert at peek-a-boo. He tired quickly of Gilmore in the Middle (a variation of Monkey in the Middle). He loved his fishing pole toy, and anything filled with catnip.
He grew up and settled down; but never lost his curiosity for new people and new things. It’s been difficult the last few years, watching him slow down into senior cat-izenhood. I’m reasonably sure he’s lost all or most of his hearing. He sleeps much more these days. I don’t know how much longer we will be together. I can only hope he knows how much he is loved…and just as much as I saved him from a shelter, he saved me too, and let me know I could trust myself to love again.

To receive an email notice when LJG posts new content, enter your email address below.

Theme by Anders Noren — Up ↑